Posted on August 10, 2017 by CavemanCatching 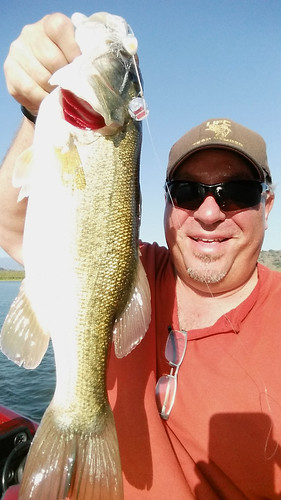 Had an opportunity to fish a rare legal night session on Lake Casitas on Saturday with my good friend and fellow fishing fanatic, Rick “R2” Raives. We were allowed to check-in at 4pm and launched by 4:30, with an off-the-lake deadline of midnight. There was decent chop on the fairly-stained water from the 8-12 mph winds, with mostly clear skies overhead.

Rick started out throwing a Don Iovino Little Slugger in Purple Phantom while I was tossing a brand new Yo-Zuri 3DB Knuckle Bait, which is a just introduced hybrid wire bait I am field testing for a review. The action was good on the points. I got a good hit on the YZ-KB with just my second cast, but couldn’t connect. Meanwhile, R2 got the ball rolling with a couple of nice 3 pound-class battlers and lost a 4+ pounder in the weeds.

Action in between the points was surprisingly slow. But, then we came across a nice rocky point that flattened out a bit at about 8 feet. I ran the Knuckle Bait across the flat and got hammered by this nice 3.5 pound leaper. 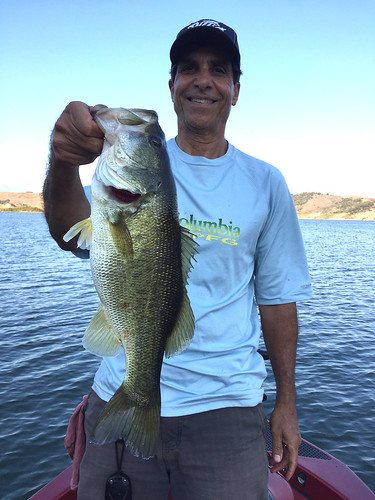 We scrambled around to several of our usual spots, but just couldn’t find a consistent bite. Finally, dusk finally began to set in. Which had both of us scrambling for some reaction baits. When I couldn’t get any love on the hardbaits, spinners, and chatterbaits I tried, I went back to the old faithful Little Slugger, and was rewarded with a couple of nice tournament sized 2.5 pounders.

Rick opted for one of our favorite, and most underrated, small cranks … the BPS Lazer Eye. He was only about half a dozen casts in when he got hit but wouldn’t stick. But, only a few casts later, R2’s rod was doubled over, as he battled this fat 4 pound-class beast into a quick “lip, pic, and git”. 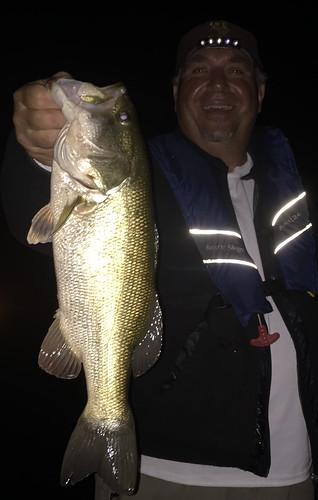 When darkness really set in, we were on the other side of the lake from where we wanted to be. So, we no-waked ourselves over while munching on some turkey, roast beef, and swiss sandwiches. When we arrived, I suggested we try a technique that had worked years ago with fellow bass addict, Mike “MikeyB” Berens, the last time I had fished Casitas at night … a c-rigged 5″ Junebug Senko. As we came across another long extended point, “R2” got absolutely hammered. His rod, once again, doubled over as he hooked into a big fish. After pulling some line, the 5+ pounder did an inverted 360, and was gone.

As we came down the rocky side of the point, I picked up one of my favorite nighttime baits … a Norman Little Deep N crankbait in Black and Blue Fleck. On my second cast, I got nailed on the 5th crank and quickly boated a nice 3 pound-class fish. I immediately tossed it back to the same area, and at the exact same point in the retrieve hooked up with this 4+ pound grinder. A third cast also got hit at the exact same spot, but almost immediately came unbuttoned.

Rick managed a couple more 3 pound-class fish on the c-rig, while I added one, as well. Before we knew it, it was time to get off of the lake. We ended with 11 fish boated, and a great time had by all. We’ll be hitting the next Casitas night session they offer, for sure!