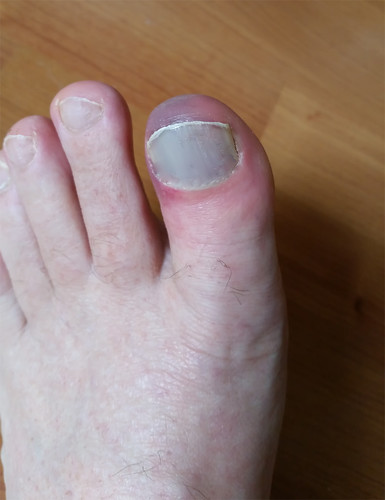 My “Friday the 13th” (FTT) actually started last night when I took a 60 MPH heater to the toe while catching my son in the bullpen. Not sure if it’s broken or not. Though, as you can see, it is quite painful and feels like it is broken. That would have been bad enough, in and of itself. But, I also had another Lake Casitas fishing trip planned for today with fellow UFC fishing fanatic, Rick “R2” Raives. Of course, upon seeing my discolored digit, the Cavewoman offered her usual sage advice when she said, “Do you think you should cancel?”. Yes, the smart thing to do … on the other hand, I am a gamer. The only way anyone is keeping me on the bench is if I can’t walk. While, ambulating is suddenly simultaneously difficult and painful, I figured I would spend the majority of the day sitting in the backseat – allowing me to stay off of my angry appendage and still enjoy some big bass hunting. FTT had other plans, however. 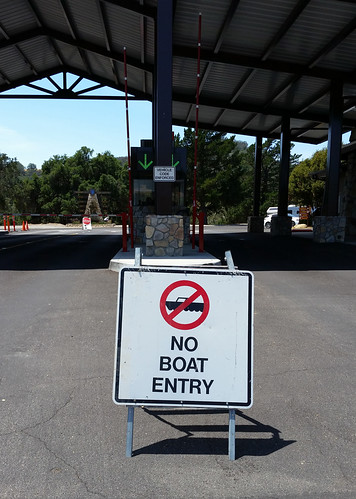 When we arrived, just before sunrise, there was this lovely sign waiting to greet us. Apparently, the already precarious lake levels had dropped even further, rendering the makeshift launch ramp unusable. While a new (old) launch ramp revealed itself on the other side of the lake with the precipitous drop in water levels, the lake staff was still in the process of rigging it since the traction racks had just arrived yesterday. In fact, they planned on opening the ramp around 4 this afternoon … too late for our purposes. I was starting to think that FTT was going to squash my hopes for the day. Though, R2 is a gamer, as well. So, we weren’t going to be denied our fishin’ mission. We just looked at each other and exclaimed, “Shore fishing!”. No, not the best idea, considering my limited and pained mobility. On the other hand, Neanderthals have never been known for their smarts. 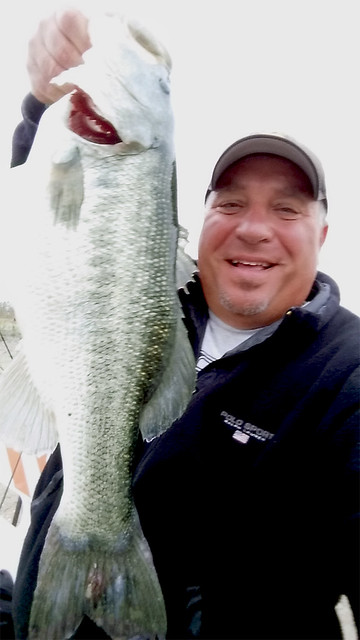 We headed for the marina of the now defunct launch area and went at it. The shad balls were thick and plentiful – sizes ranging from “Good ‘n Plenty” caliber to solid four inchers. The fish were blasting them every ten seconds, leading us to assume topwater would be the ticket. Yet, neither of us could manage any interest. That’s when I decided to tie on a shad colored tail-spinner to attempt to match the hatch. It didn’t take long for my slow-roll retrieve to stop dead in the water and my rod to double over. The way the fish fought (a steady, yet hard, pull), I wasn’t sure what I had hooked into. And, when several diving birds surfaced near my line, I was sure I had hooked into some fish-eating fowl. Suddenly, a huge hawg exploded from the water and quickly allayed my fears. After, a tough tug of war I finally lipped, clicked and liberated this 6 pound beast.

Rick utilized a tail-spinner to nail a nice 4+ pounder, along with a chunky 2.5 pounder. I also managed another four keepers on Don Iovino’s Little Slugger baits, while R2 was able to add another with the shad-imitating plastics. While we would usually stay on the boat until late in the afternoon, 5+ hours straight spent on my hobbled hoof had me ready to call it quits before noon. We ate our lunch with a beautiful view of the lake and then headed home. And, though my toe feels like the late Keith Moon is banging out a drum solo on it as I type this, all I have to think about is that first fish of the day for the pain to begin to wane. Who knew a big fish could be a painkiller, and Friday the 13th beater?!?!?