Posted on February 22, 2016 by CavemanCatching

I intended to write this up on Saturday. But, the Cavemom came into town unexpectedly. Soooooo … you know … priorities!

I had been itching to get out on the water all week long, with the full moon on the way and the water starting to warm up. Because, to me, that means pre-spawn Bass. Definitely one of my favorite times of year to target big, fat bucketmouths who are on the chew as they prepare for the physical grind of the spawn.

I hit the lake around 3pm with high hopes as there was a nice light breeze that was putting a decent chop on the water. Though, we also had gin-clear skies, cool air temps, and somewhat stained water. I started out with a great bait for the fish I was expecting to encounter, which also happens to be one of my all-around favorite hardbaits: the Yo-Zuri Rattlin’ Vibe in the Gold, Black, Orange (GBO) pattern.

My second cast came to an abrupt stop and my pole doubled over when a nice 4-5 pound class fish nailed it and did an inverted 360 in the air. I was stoked that she wasn’t able to throw the lure on that maneuver. But, bummed just seconds later when she self-released near the dock as I reached for the net. Couldn’t get anymore love on that bait, despite trying a few more patterns. After trying numerous other baits, I finally went to a drop-shot to try and get the threat of skunk from joining me on the ride home. Finally, I got a little 1.5 pounder to cure me of the stripe. 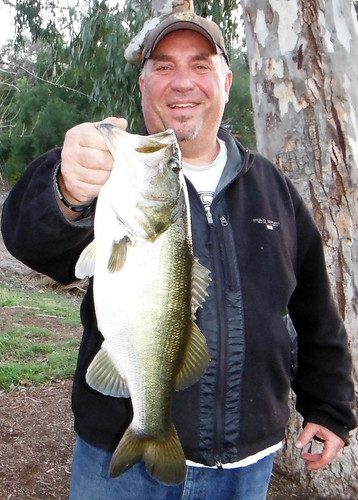 I followed that up with a couple of 2 pounders on a small tail-spinner. But, that was about all the action I could entice. Ran into a couple of other anglers who were having similar slim pickins. I was thinking about calling it a day as the sun set behind the surrounding hills, but decided to hit one more spot before throwing in the pre-spawn towel. 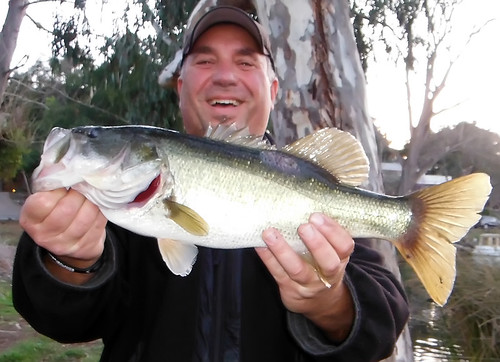 As usual, I quickly made another cast to the same area. Sure enough, in the same exact spot I tied into another big fish. This one wasn’t inclined to jump as much, as she cleared the surface only once. Though it was clear they trained together, as she made the same inverted 360/half-gaynor combo. When the dust finally settled from our protracted battle, she was in the net, in the pic, and on the digi scale. Her tally was a nice five pound and one ounce.

Sensing that I might have found a school of big fish, I quickly retied and sent my bait hurtling to the same vicinity. Once again, about 15-20 yards from shore, a big bruiser completely inhaled my offering. This one was “only” a 4 pounder. So, I gave her a quick release without putting her in front of the camera or on the scale.

Again, I fired back to the same spot and again got hammered in the exact same spot, which I had determined was a small hump that was holding this school of big pre-spawn fish. Unfortunately, this time, the fish didn’t stick. I decided to give that spot a rest for a second, and sent my bait flying toward some tullies on the other side of the bay I was fishing. I only got three or four cranks of the reel in when my rod went completely bendo and line started peeling off. I knew this was an even bigger fish and implored the fish to “stay down” the entire fight. I got her to shore and immediately found that she had swallowed the bait and was going to need some delicate surgery. Once I freed her of the hooks, I put her on the scale and, as the weight was settling in somewhere in the mid six pound range, I noticed she was bleeding out the other side. So, I quickly revived and released her without an exact tonnage or picture. 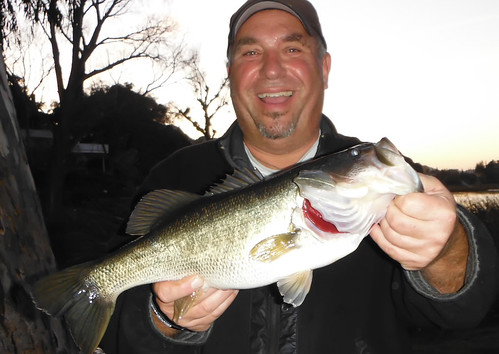 After another retie and a couple more fruitless casts to that side, I went back to the original spot. As the rattler made it’s way to the hump, it once again was mauled by another hefty heffer. She never cleared the water, but she pulled so hard that we were in an utter stalemate for what seemed like an eternity despite the 12 pound Yo-Zuri Hybrid line. I couldn’t believe my eyes as she literally jumped into the net … another monster mommy-to-be. Five pounds, five ounces, to be exact.

When my next two casts got hit but not inhaled. I decided to try some other baits. But, none of them could entice even a bump. So, after 15 minutes of trying, I went back to “what had brung me to the dance” earlier. 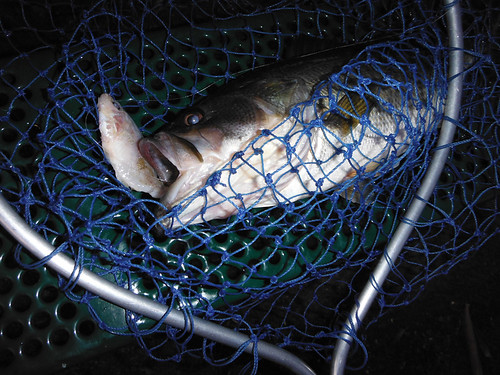 It was a wise decision, as the very first cast with the Rattlin’ Vibe was viciously attacked at the hump. Again, line started peeling from the reel as the mammoth Largemouth zig-zagged the bay in search of something to snap me off on. When she finally gave up, I got this 6-4 pounder into the net and realized that I had just landed a “twofer”. Actually, she had just spit up a partially digested hand-sized Bluegill. Which also made me realize why the fish weren’t interested in the other baits I had just thrown. This was clearly “match the hatch” conditions. 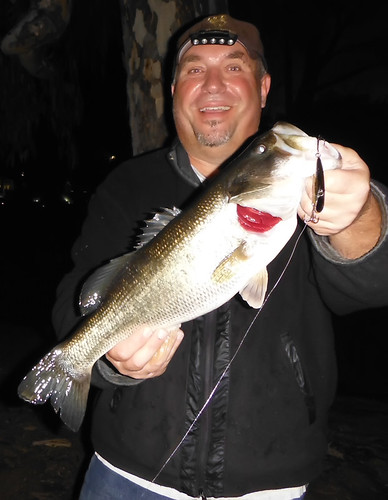 I kept firing my bait in the direction of the hump, and continued to get hammered by large sized fish. Though, the next four fish had clearly downsized a bit to the 3 to 4 pound range. The school was still fired up, but the really big fish were clearly exercising caution. I began fishing the rest of the bay, hoping to find some other fish, but mainly to give the hot spot a little rest. After a 10 minute hiatus, I went back to the well one more time. Sure enough, lying in wait as my bait hit the hump was this 5-4 fatty. She gave me a couple of those patented inverted 360 jumps before she allowed herself to be lipped, picked, and weighed.

That was it. I made several more casts to the hump and around the bay. But, the bite had definitely turned off. Which was fine by me, considering the last hour and 15 minutes had been wide freaking open on some big mommas on the chew before the spawn. I ended the day with 14 fish, and a top five with a weight over 27 pounds. Now you know why this is one of my favorite stages of the year for catching big bass. Though, that window is usually very short. So, be sure to get out there when it opens in your area of operation.