Posted on January 22, 2016 by CavemanCatching

Late last year, I wrote about getting my line wet with my new fishing friend, “Dr. J”. An incredibly nice and talented angler who prefers his anonymity. On Wednesday, we decided to head out for another session on Lake Sherwood despite our reservations about the post-front, windless, “bluebird sky” conditions.

As we hit the water midday, Dr. J asked me where I wanted to start. Since the water was cold and turbid from the Winter storm that had just passed, I felt that we should fish any areas that had sun-facing rocks extending into the water which would give the fish a warmer environment. We aimed his sled at a rocky island in the middle of the lake.
While I started throwing some reaction baits, he opted to drop-shot some ten year-old Powerworms with tons of glitter because he felt the dirty water called for “some bling in the bait”. 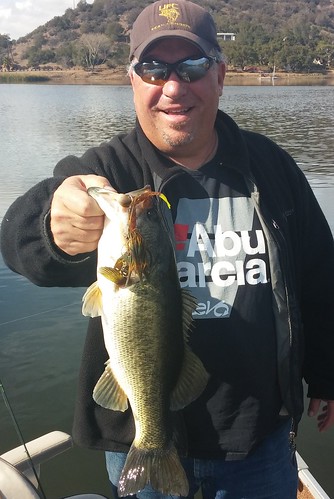 It only took him a cast or two to hook up with a nice 2.5 pound skunk-buster. As we moved along a cattail covered bank, he hit up two more similar sized bass. That was enough to convince me to join the DS party. I grabbed my ultra sensitive Big Bear Finesse Rod adorned with a 4.5 inch Aaron’s Magic Roboworm and, sure enough, I scored my first fish of the day with another cookie-cutter sized model.

We swung around to the far side of the island that has a small bay coming off of a rocky point where I have had chatterbait success previously. So, I called my shot as I casted out a Cave Custom Boogee Bait into the bay. BOOM! This nice 3.5 pounder nailed it as I slow-rolled it back toward the point. A few casts later, I had another similar sized one crush it just a couple of cranks into the retrieve. We decided, then and there, to appropriately name that area “Chatter Bay”. 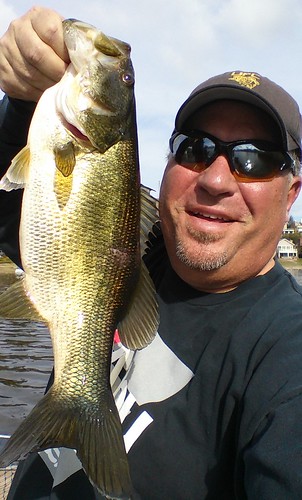 When the bite died down there, it was time for Dr. J to call his shot. So, we headed for a tullie island nearby where he had a good crankbait bite going recently. It only took him two casts to connect with a nice 3.5 pound bruiser (he insists on no pics). Meanwhile, I decided to stay with the Boogee Bait. That turned out to be a smart move because this hefty 4 pound class fish nailed my bait about 10 feet from the boat!

We made our way around the rest of the island and Dr. J was able to manage one more nice 3+ pound fish on a football jig before we moved on to my next call … a sheer rock wall that falls into deep water along the side of the lake. This is a great spot for the drop-shot. About half way down this stretch, I put the bait right into a little nook in the wall and, as it slid down the underwater face, I felt the slightest of ticks. I slowly reeled down and, when I got that spongy feel, set the hook on what instantly felt like a good fish. She dogged me hard in the deep water on the 6 pound test Yo-Zuri Hybrid line for several minutes before 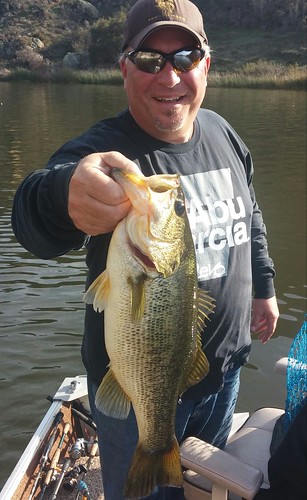 she came up and unwillingly slid into the net. We snapped this pretty picture of the 4.5+ pound pigskin before sending her back to the depths.

When we couldn’t entice anymore action in that spot, Dr. J made the call to go across the lake to another “walled” section. There he was able to score his best fish of the day, a 4+ pound battler on his football jig, while I got one more on the DS … another 3+ pound fatty.

It was getting late, the sun was almost down, and it was turning quite cold. So, we decided to head back to our original spot before calling it a day. As we approached the point leading back to our newly named bay, I thought the conditions were perfect for my favorite hardbait … the Yo-Zuri Rattlin’ Vibe in the gold, black, and orange pattern. As I slow-rolled it back along the rise of the point, the bait suddenly came to an abrupt stop and my rod went BENDO! Big fish on!! I kept my rod tip down to keep her from jumping and shaking the 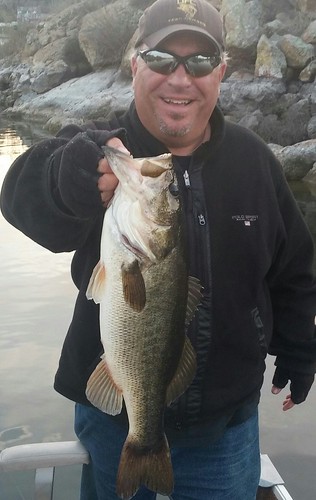 free of the trebles. Finally, we got this 5 pound-class fish on board for our thirteenth, and final, fish of the day.

As we made our way back to the docks, we both reflected on how surprised we were that the bite was quite decent considering the conditions, and how the quality of the fish were so impressive. This session really proved the old adage that the fish are always there, regardless of the conditions. You just need to figure out what the fish need in order to be happy and hungry. In this case, it was all about where the water was holding the most heat, and the Winter’s sun reflecting off of the rocks near deeper water was truly the place to be. We also heartily patted ourselves on our backs for calling our shots. But, no worries … there were no broken arms in the process. 😉