Posted on December 4, 2015 by CavemanCatching 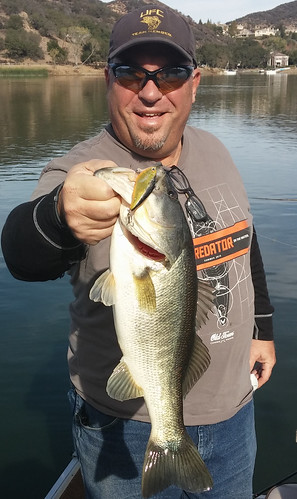 For a few years, I have been fishing from the Lake Sherwood docks when another local angler, who I will dub “Dr. J” (no, he is not a Hall Of Fame former basketball star), would often dock his boat after a day or evening on the water. Several months ago, he politely invited me to join him on his converted Bass boat for an evening session. As it turned out, we had a lot of things in common besides our love of fishing, and made plans to get together again on the lake. Due to scheduling issues, we weren’t able to accomplish a rerun until yesterday, when we set out for a 6 hour session under bluebird skies, calm winds, 50° air temps (though, it did rise to 70° for a short time), and cold and stained Winter-water conditions.

Our first stop was near a small trench that ran parallel to a bank, about 25 feet out. Looked like the perfect spot for some Winter rattle trappin’ with my favorite Yo-Zuri Rattlin’ Vibe in the GBO pattern. Sure enough, my third cast came to an abrupt halt as this 4+ pound fish decided to chomp down on my offering. She really put on a great tussle before Dr. J deftly slid the net under her and snapped this pic. 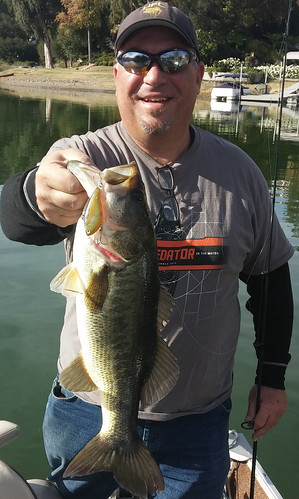 We fished the area for a bit longer, but only could coax one more slap at the lipless crankbait before we moved to fish the banks surrounding a nearby island. Dr. J managed a couple of nice keepers on his custom jig (sorry folks, no pics … he insists on anonymity), while I could only get a short bite on a mid-diving crank. Despite trying numerous other options around the island we couldn’t get anymore bites.

Our next stop was along a rip-rap bank. When I realized that there was another channel about 10′ deep running parallel to the bank, I felt it was another great spot for the Rattlin’ Vibe. It only took one cast to be proven right when another 4+ pound beast put the brakes on my slow-roll retrieve. Again, despite the cold water conditions, this fish was ready for a fight and gave me all I could handle before we got the lip, pic and acquit. 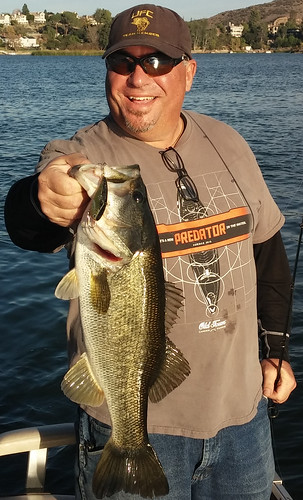 Joel picked up another jig fish in the same area before the bite died there. So, we headed out to do some deep-water drop-shotting along some shear rock walls. We were able to pick up several nice keepers with this method on some Margarita Mutilator Roboworms. Time began running out, and the wind was picking up. We decided to hit the flats near the first island we fished, hoping the breezy conditions would turn the bite on. We fished it hard, but found no love. I suggested we give the lee side of the island a try, fishing the edges there for any ambushing Bass. We worked our way over to it and, when I had the perfect alley for a parallel cast, made a long “Dinnertime, dinnertime, din-din-dinertime” cast right to the waters edge. I only got about four handle cranks in, when the I hit that virtual brick wall and my rod went totally bendo. I knew I had the day’s best fish on even before she tried to come up and shake the Rattlin’ Vibe free. I kept my rod tip in the water and the line tight to keep her buttoned up. After a couple of dog dives under the boat, Dr. J swung the net under this 5 pound-class hawg.

We ended the day with 5 fish each, and an even stronger bond as angling buddies. A great day, to be sure. And, I’m looking forward to the next excursion, on one of my favorite fishing locales, with my newfound fishing friend.