Posted on October 9, 2015 by CavemanCatching

For me, there is no better Bass fishing than when the Fall bite truly begins. The big fish move up, throwing all caution to the wind, while they voraciously pack on the “LB’s” before the cold of Winter sets in. It’s a reaction bait fisherman/woman’s dream as the action can be fast, furious, and phenomenal. We got the first inkling of it last week when Mark “Chief” Torrez and I hit up Lake Sherwood for about 30 fish between us. Though, most of the fish were in the 3 pound range. However, last night as I found myself flying solo on an 80° windless evening, the annual Fall Peg Fest was clearly underway. 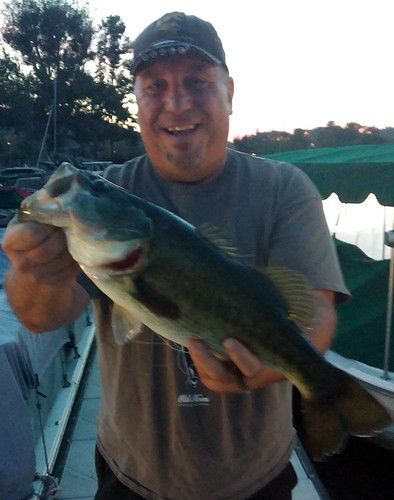 The sun had already set as I threw out my first cast with a Yo-Zuri Rattlin’ Vibe in the GBO pattern to a rock point of a nearby island, which brought no reaction at all. You know when you see a spot that you think is a perfect place to hold fish? Many times, unfortunately, there is no fish there … or, you just can’t seem to draw their interest. Well, as I glanced to my left, I saw a little point jut out from the row of tullies on the island’s shoreline. I threw my next cast past it and high-sticked my bait to keep it just above the tall grass which was only 1 foot below the surface. As it came by the point, a huge fish exploded out of the water knocking my lure three feet into the air. I quickly recasted to the same spot and, just past the little tullie point, a nice 3 pound classer hit my bait but immediately jumped up and threw the lipless crank. My thinking was to quickly reel in and hit that spot again. However, I only got about 2 more handle cranks in when my rod suddenly went completely bendo, and my best battle of the year ensued. I was sure I had an 8+ on the line … but, as I finally slid her into the net I could see she wouldn’t quite make that weight. Though, I wasn’t disappointed when she tipped the digi scale at 5-3. 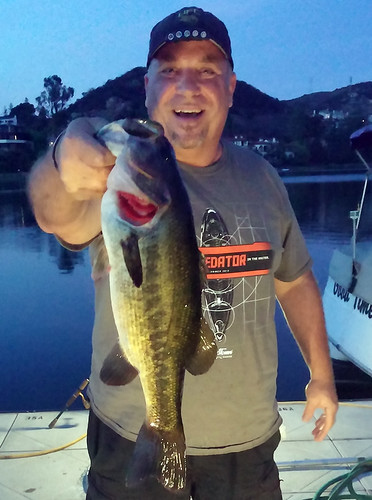 As I unhooked her, I noticed that she had completely swallowed the bait. Which gave me confidence I was on the right track … and, boy, was I! After quickly retying, I shot the Rattlin’ Vibe back to the very same spot. Sure enough, as it went by that point … BOOM! Another giant fish inhaled it!! This one put on an aerial show worthy of Cirque Du Soleil. When I finally got a hold of her, I knew I was onto something good. After weighing her in at 5-5, getting the pic, giving her a little CPR, and retying the frayed line once again, I quickly gave the same spot another try. It worked! Another big fish just couldn’t resist. This time, a four pound class beast completely swallowed the bait. After performing some deft surgery, I gave her a quick release with no pics or weigh-in. But, with three huge fish in three casts, I knew I wasn’t through. 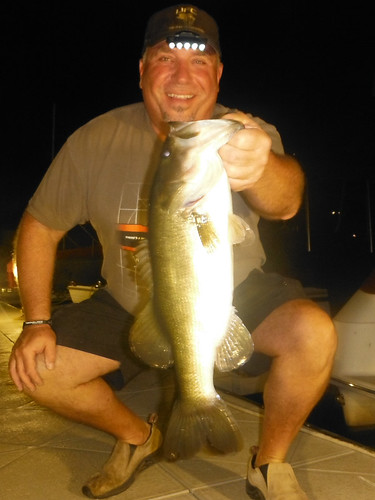 Another quick retie, and I was back at it. Could I go 4 for 4??? No. Though, I did go 4 for 5, as the next cast to the same spot produced a hefty 3.5 pounder … perhaps the one that came unbuttoned earlier. When the rattle bite finally died down, about 45 minutes into the session, I had landed 8 fish with a best five right around 22 pounds! But, my night wasn’t over.

After getting my first buzzbait fish of the season, a nice 3+ pounder, I decided to tie on my Cave Custom Boogie Bait which is perfect for brushing the top of the shallow grass. It wasn’t getting any love and I was just about to try something else when, halfway home on the retrieve, my line came to a sudden stop. My pole doubled over and, when the line started to peel off of the reel, I knew it wasn’t a snag. Fish on! The 6-5 mammoth kept diving under the dock and the moored boats … it was an epic fight. But, finally, Neanderthal triumphed over beast and we posed for this nifty shot. 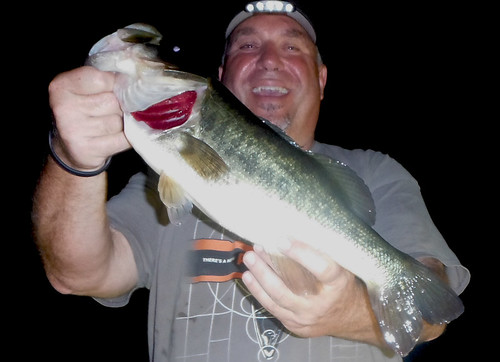 On that high note, I was about ready to call it a night. However, I decided to try one more spot on my way out of the lake area. I knew the Boogie Bait would probably be the ticket there. I wasn’t wrong. My third cast (again, the lucky third cast) brought home another 3 pound classer. Then, a few casts later, another 4 pound classer. Then, nothing. The bite seemed to die even though I could hear fish busting bait in the darkness. I let the area rest for 5 minutes then gave it one last try … BOOM! Another big fish on!! After I finally lipped this hawg and took the photo op, it came in at 5-4! Giving me a baker’s dozen, and a final top 5 total of over 26 pounds. That was it … I headed home happy to have been a part of such an colossal bite. Pig Fest 2015 is on!