I should have posted this 2 days ago. But, the Caveboy’s birthday celebration got “in the way”. Oh, well! 😉 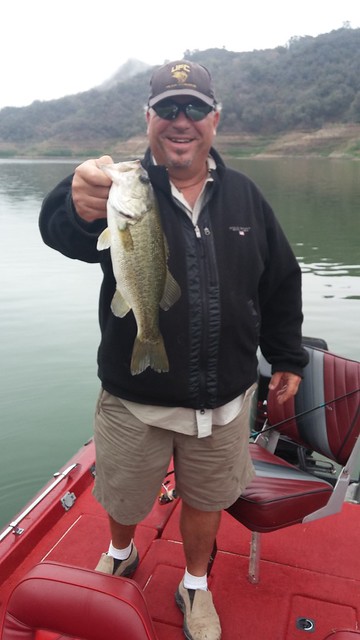 After being on the DL for nearly a month with a major muscle tear on the back of my ribcage, I finally hit the water again. Thanks to the generous invitation by fellow UFC member and fishing fanatic, Rick “R2” Raives, to join him on his cherry red Skeeter for a day of fishing on Lake Casitas near Ojai, CA. It looked to be excellent conditions with high air temps at 78°, little or no breeze, overcast grey skies, and tons of Shad in 4-14 feet of water. Our expectations for a good top water bite, and incredible action overall, were very high.

We started our day about 6:20am on a particularly fishy bank … usually. We could see and graph bait everywhere. But, for some reason, the fish were nowhere to be found. Nothing busting the Shad on the surface and very few marks on the electronics. Though, we kept hitting the banks and secondary points along the shoreline. Finally, after about 40 minutes, Rick got bit on a split-shot Don Iovino Little Slugger. Unfortunately, the fish wouldn’t stay hooked. However, it only took a few more minutes before I was able to get this tournament sized day-starter on the same set-up. 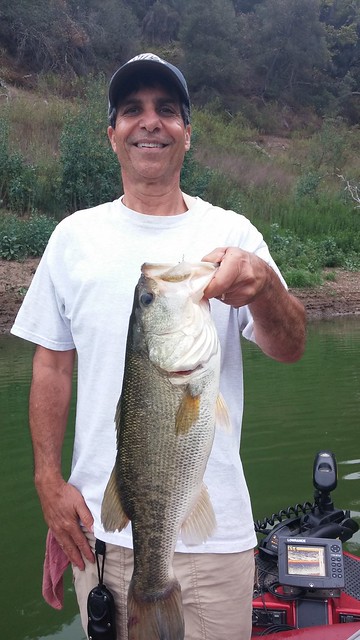 Although, this definitely emboldened our outlook, the fish still weren’t cooperating. The bites were few and far in between, and the few we did get were nipping at the tail. We switched over to the other side of the channel and, about halfway down, we entered a little cove. As we came to the back of it, R2 mentioned that he had gotten some fish in the middle of the bay as his cast settled into that exact zone. I turned to him and said, “Well then, you ought to get bit right now!”. Not three seconds later I saw him reel down and lean back into the hookset. Six pound line immediately began pulling off of his reel … this was a nice fish. I grabbed the net and anxiously waited as the fish repeatedly dove to the depths. But, Rick stayed calm and expertly fought the fish into submission before holding this 4 pounder up for the victory pose.

After a couple more fish that weren’t photo worthy, we decided to make a run to another area we often find success. It starts with a nice 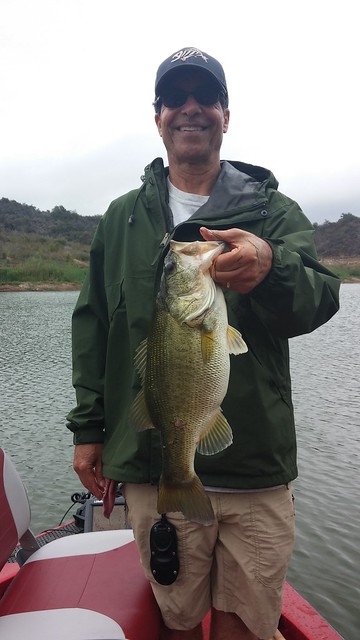 rocky bank. Unfortunately, the few fish we found there were on the diminutive side. Though, I did score the one fish we would get that wasn’t on the Iovino finesse bait … it inhaled a shad colored Markey Tommy Tailgunner. After working a long stretch of secondary points and banks, we came to a huge bay that had a boat fishing the far side. As soon as he spotted us, though, he pulled a 180 in an attempt to cut us off and keep the massive spot to himself. We didn’t come within range of each other until we had reached the very back of the cove. As we went to move around him some 100 yards clear, he kept casting at us to ensure his dominance of the area. R2 and I kind of laughed to ourselves until we were well clear. Suddenly, Rick hooked into a nice 2+ pounder, which clearly pissed off our fishing neighbor. He must have been livid, however, when Rick tied into this 3+ pound jumping and thrashing beast just two casts later.

We were still enjoying the instant karma rebate we had bestowed upon that guy when my day took a sudden painful turn. We were coming to the far point of the bay, where the flies and other insects were plentiful. I had been buzzed by what I 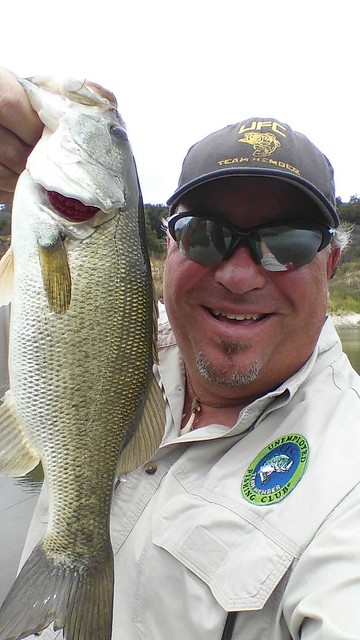 thought was a fly that stealthily landed on my hat. I was too busy trying to get my own karma fish when that “fly” climbed down to my hat’s edge and planted a stinger right into my left temple. I swung in vain at my attacker as it flew off, revealing itself to be a large wasp. Needless to say, it was quite painful … other than your eyes, lips, or genitals, I can’t think of a more sensitive spot. The side of my face throbbed the rest of the day. But, of course, it didn’t slow me down one bit. We continued on, catching a few more fish that weren’t worth a photo op. Even returning to our original area in the hopes that the bite had turned on there. It hadn’t. At least, not to the degree we were hoping.

It was getting late, so we decided to try one more spot that we can usually find willing participants. As we settled in to it, my very first cast got slammed. However, my hook returned with just a 1/4″ piece of my bait still attached. Though, it was a sign of things to come. A short time later, I hooked into another of the smaller keeper variety. Then, I got hammered by a fish that seemed to be of a larger model. Despite his dogged battling capabilities, this 2+ pounder’s lack of girth surprised us after sliding into the net. 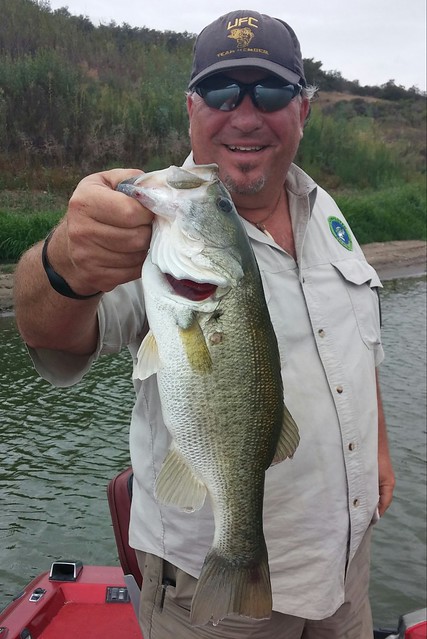 I hooked into a couple more before R2 finally joined in on the action of our new found honey hole. The further along we went, the more active the fish were becoming. We were even starting to see the first real surface busting we had witnessed all day long. As we turned the corner on this long stretch of bank, and I dragged my bait across the point, I felt the faintest of taps on my super-sensitive Big Bear finesse rod. I gave it a quick-snap hookset and watched as my rod went bendo. She instantly went airborne and really put on a show for us. It was my best fight of the day and ended up resulting in this 3+ pound fatty.

We nailed a couple more tourney-sized swimmers before we reluctantly had to leave them biting. When we tallied up our fish count on the way back in, Rick informed me that our 23 Bass total was the best his boat had seen on Lake Casitas. Certainly, my 14 fish score was my PB on that lake, as well. We didn’t land any monsters, but the action was good most of the day, and on fire at the end. It all definitely made the ride home enjoyable for us both … and, the throbbing in my head much less agonizing for me!