Posted on June 4, 2015 by CavemanCatching

I know it has almost been a week since this trip occurred, but I have been very busy with the end of baseball playoffs and the beginning of the All-Star season (Yes, the Caveboy made it!). Such is the life of a Neanderthal Pony League manager, I suppose. With my excuses done, on to the story at hand.
My good friend and fellow UFC fishing fanatic Rick “R2” Raives offered to take me out on his red Skeeter for a day of fishing at Lake Casitas. We arrived at 6AM to temps in the 50’s, overcast skies, light winds, and warm slightly stained water. By the way, the lake is as low as I’ve ever seen it … the “marina” is about half a mile from where it normally is!
We started out on the North side of the lake. With the fish chasing the huge Shad spawn, I started out tossing a small Shad patterned Tommy Tail Gunner tail-spinner. On my third cast, my medium-heavy rod goes completely bendo on a nice sized fish. Unfortunately, halfway home, the fish just came unbuttoned without so much as a jump. Not the way to start one’s day! When I couldn’t get anymore action on that bait, I started tossing the new 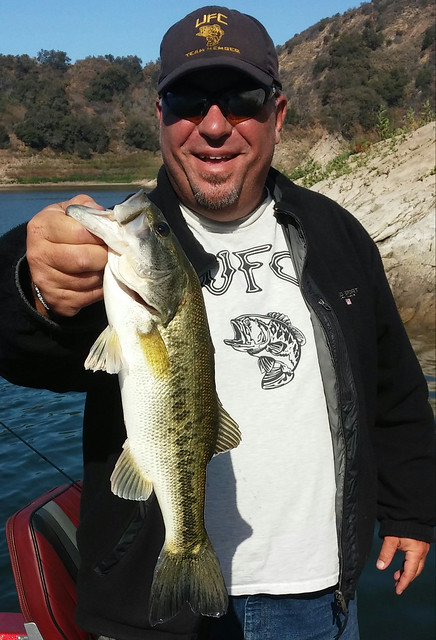 Don Iovino Little Slugger in the Jorge Special pattern. It only took a couple of casts to get a taker … a very small keeper that wasn’t picture worthy. I followed that up with another cookie-cutter sized fish a few minutes later. This enticed my fishing partner to jump on board the pattern that was working and he quickly got the skunk off with our dinkiest fish of the day. Even though the fish were on not the biggest, they were really fighting hard for their size.
When that area slowed down, we moved to a rock-lined point and bank. I shot the tail-spinner parallel to the shore and got slammed a 1/3 of the way home. After a good tussle that felt like a 5+ pound fish, this 2.75 pounder found his way onto the boat and into the shot. 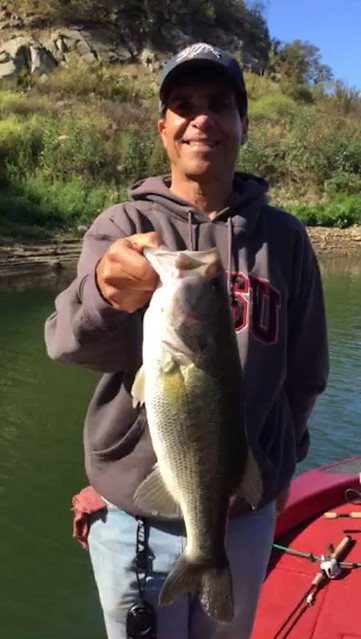 I got hit a couple more times before we made our way to the back of the bay. As we cruised the back bank, I told Rick he was going to get nailed in this area. Not 30 seconds later, he was fighting a nice little keeper. He released that one without a pic. But, on the very next cast, he would tie into another fish … but, this one had some size to it. And, some fight. He battled the fish back and forth, yelling to me as I waited to net it “He’s sounding on me!”, as the fish repeatedly dove for deeper water. When the tussle finally ended he was posing with this quality 4 pound-class fish.
That was about the time the clouds broke and we began fishing under blue bird skies. Of course, it didn’t help the fishing. We got plenty of hits on the Little Sluggers, but they were tail-biting them and missing the hooks. I managed three more small keepers, while R2 got one more and a nice Rainbow Trout that actually chased his bait out of the water!
We both had afternoon commitments, so we had to end it earlier than we would have liked. However, as I called “Last cast!” and started dragging the bait across a pebble-bottomed point, I felt the slightest of pick-ups on my Big Bear worm rod. I set the hook and immediately thought I was snagged. Then, the snag started fighting back. My rod totally doubled over and I knew I had a huge fish on. But, just before I could get a secondary hookset on the fish, she raised her bowling bowl sized head up out of the water, opened up her mouth (which I could have easily fit my Caveman-sized head into), and with one flick sent the hook flying back at me. To say the least, I was crushed. Especially having started and ended my day in similar fashion. Though, it just leaves me with the desire to get back there ASAP to try it again!