Posted on March 2, 2015 by CavemanCatching

I’m a pretty social Neanderthal … I just love being around people. Especially when it comes to fishing! Nothing better than sharing your on-the-water experience with another Homo Eructus. However, every once in a while, getting a solo angling session in can be just what the Medicine Man ordered. That’s where I found myself the other day when none of my fishing friends were available for a last minute two-hour excursion. Conditions seemed right, with a low front just beginning to move into the region, overcast skies, a very gentle breeze, and cool air temps. I must say that there was something magical about being outdoors at that moment and experiencing the mood swings of Mother Nature while also getting a chance to challenge some of her stealthiest creations. I was truly reveling in my private experience.

I threw most of my usual baits and wasn’t able to find any takers at my first stop … a secluded cove lined with reeds. I moved to another area near some boat docks and, again, wasn’t finding any love. That is, until I picked up a Malibu-rigged Gambler Baby Bacon Rind. I flipped it underneath a nearby boat and, before it could hit the bottom, my line started moving to the port side of the boat. I reeled down quickly and set the hook hard … BAM! I was immediately rewarded with a nice tussle from a 3.5 pound class fish. Unfortunately, the fish had swallowed the hook and was in need of the gut-hook removal trick. Even though she was successfully operated on, I had to get her back in the water quickly. So, no pic of my skunk-buster. 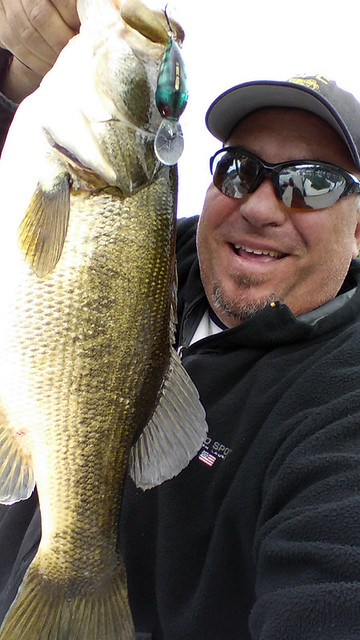 Not too long afterwards, I casted the same bait out toward some reeds and scored a fat 2+ pounder, and missed the hookset on another. The bite then swiftly died, prompting me to hastily move over to the last dock for some crankbait action before my short session came to a close. I worked the Yo-Zuri 3DB Mid Crank in the Bluegill pattern pretty hard and was down to one of my final casts when, halfway back on the retrieve, my lure just stopped. I set the hook and, even though my drag was set pretty tight on the 12 pound Yo-Zuri Hybrid line, my drag squealed a bit … making me think I had snagged the bottom. Suddenly, “the bottom” began pulling and taking even more drag! BIG fish on!! Despite the cold water, I got a great battle before finally getting her to the dock. This fat fräulein and I posed for a quick pic and then went for the official weigh-in … 6 pounds, 2 ounces! Best of the year, so far!!

Sadly, that was all I had time for. But, what a way to cap off my time of sweet solitude!