The Fruits Of Frustration

Posted on February 24, 2015 by CavemanCatching

After months and months of trying, I finally was able to get UFC Co-Founder Mikey B and my fishing friend and neighbor Fireman Sean on the water at the same time. We met up at Westlake to try our luck, but after just 30 minutes, we could tell the conditions weren’t quite what we had hoped for. So, we made the quick jaunt over to Lake Sherwood to give it a go. It was partly cloudy, totally windless, in the low 60’s, with cool stained water.

This was my first outing since a rare very quiet (ie. only one bite) skunk session the week before. Needless to say, I was raring to get my fish on. My very first cast with a Yo-Zuri Rattl’n Vibe got absolutely hammered halfway back on the retrieve. Yet, the fish stayed on for literally two seconds. My next cast got ambushed at nearly the same exact spot … with the same exact results. Then, I had the same thing happen with a small crankbait, and then a Senko. To say I was getting frustrated is a bit of an understatement.

Meanwhile, my two compadres had moseyed down the way to an adjacent cove. Mikey got his day going with a couple of 3 pounders. While Sean had found the honey hole and had already tallied 4 fish. Then, I hear some hootin’ and hollerin’. Next thing I know, I’m getting pictures texted to me from both of them. They had gotten onto a double hook-up with these two fatties. 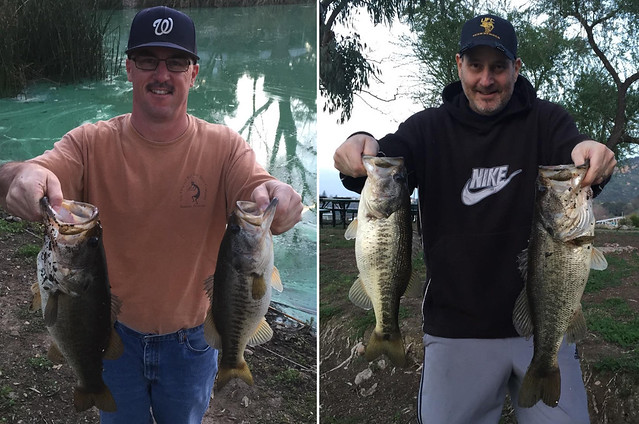 While their fishfest was going on, my disappointment was continuing. I was now up to eight fish that had either come unbuttoned or were missed on the hook set. Wisps of steam were likely visible emanating from my ears. Finally, I was able to get the skunk stink off of me with a couple of two pound schoolers that fell for the Vibe. Then, we all decided to make a move to the front side of the lake. Darkness had set in … and, I was on a mission. My Denali Kovert spinning rod was adorned with a T-rigged Gambler Baby Bacon Rind. It just seemed like the right bait at the right time. 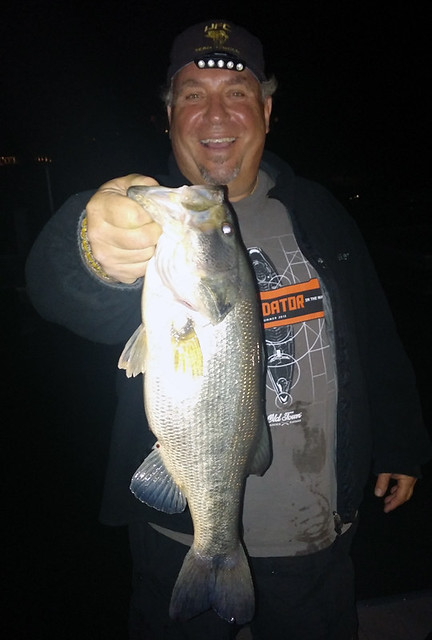 My second cast settled in right at the water line parallel to the edge of the dock I was on. It only took a couple of twitches before I felt the lightest of taps and my line began to tighten. I reeled down and leaned back … BOOM! Nice fish on!! After a couple of runs under the dock, Sean finally put the net under this nearly 5 pound beast.

I got a hold of two more in the 3 pound class to get my total to 5 fish, while MikeyB and Sean nailed 6 and 8, respectively by the time we called it a day. The best part, was finally getting those two knuckleheads out with me for some fishing. Though, finally getting off the schnied with a fruitful session of my own wasn’t too bad, either!