They Just Kept Getting Bigger

Posted on December 11, 2014 by CavemanCatching 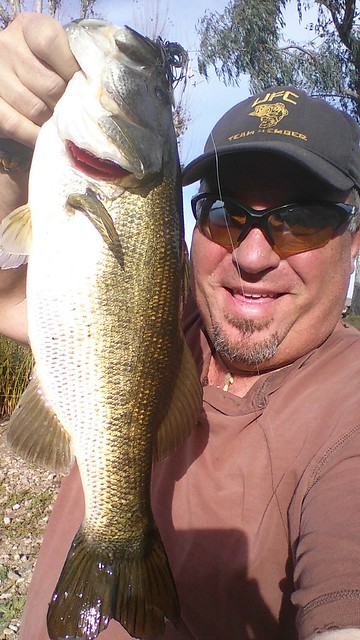 Yesterday was one of those days where everything just seemed to align itself perfectly. A beautiful late Fall day with ideal fishing conditions: a big approaching low system set to bring the first real northern storm to So Cal, high clouds giving off diffuse grey light, 70° with a slight wind putting a small ripple on the surface, cooling water temps with huge bait pods pinned into a small bay, and big hungry fish trying to pack on the “LB’s” with Winter around the corner.

I decided to take advantage of the situation by heading out to Lake Sherwood for a mid-afternoon session. Lately my Cave Custom Booyah Boogee Bait has been one of two “baits of choice”. So, I started by tossing it out into the cove. About halfway home on my second cast, the bait just came to a sudden stop. My rod doubled over and a tough battle began. When it was all said and done, I had my day-starter that came in a tick shy of 4 pounds. 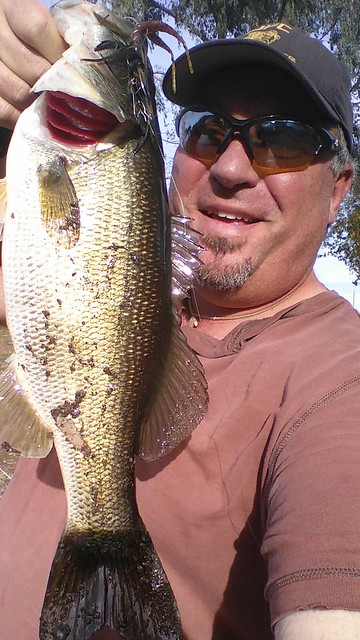 While I was releasing that first fish, I saw some bait in escape mode over near the row of tulles to my right. I tossed that bladed jig as far as I could parallel to them and began slow-rolling it just off of the bottom. Again, at about the mid-point of the retrieve the bait felt like it hit a rock. Only this rock began moving and peeling some of the Yo-Zuri 12 pound Hybrid line off of the reel. I knew this had to be an even bigger fish. It was, as I discovered when she did a couple of airborne inverted three-sixties! When the show was over, the big girl tipped the scales at 4-5 and then was nice enough to pose for this publicity shot.

I threw the Boogee around for a bit more and felt a few fish swipe at it, but they had become wary. Since the Bass were still chasing the Silversides up to the surface I knew that the bite hadn’t died … it was just time for a change of offering. 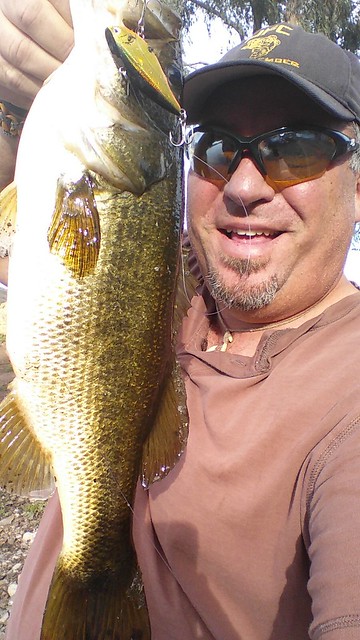 The other hot bait, recently, has been the Yo-Zuri Rattl’n Vibe in my favorite GBO (Gold, Black and Orange) pattern. Of course, one of my rods already had it tied on. So, it was a logical choice. It also turned out to be a good choice. My very first cast with it got inhaled after just three cranks of the reel handle. They way my rod went Bendo and the fish was pulling I began to think that this fish was even bigger than what I had already landed. After a protracted tussle and a few heart-stopping runs towards the tulles and above-surface head shakes, I was finally able to gain the upper hand. With a quick grip of the lip, I had my 3rd fat football fish of the day … an even 5 pounds!

Needless to say, I was extremely stoked. But, also, extremely motivated to keep going despite the stiffness that was building up in my right shoulder from fighting these battling Bass. It only took another few casts before I felt the vibration 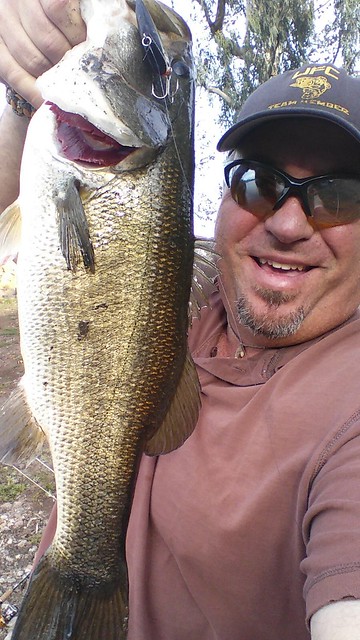 of the rattling crank bait change as the fish came up to try and destroy it’s prey. It seemed like an eternity for the rod to actually load up. When it did, I leaned back and set the hook. Instantly, the fish went airborne. I couldn’t believe my eyes … it was another 5 pound classer! If it was possible, this fish fought even harder than the others … or perhaps this old Caveman was staring to feel the effects of going at it with four consecutive beasts. Either way, it was another fantastic fight. As I got her closer, I could see she only had one of the hooks keeping her pinned. So, I kept the pressure on her and horsed her to shore as quickly as possible. Got her on the scale after the photo-op … a 5-3 sow.

After the release, I did some quick shoulder stretches and then set out to get my 5-fish limit as soon as possible. My wait was extremely short. On the very next cast, I was only a couple of handle cranks in 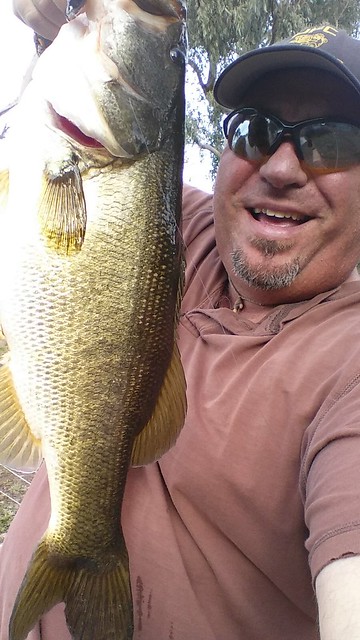 when the bait felt like it got snagged on a brick wall. My rod hadn’t bent like that in a long time, and I was totally unable to move the big girl, at first. I knew this fish was HUGE! She made several line pulling runs and dogged me like an underwater tank. My heart was beating wildly while I thought to myself “They just keep getting bigger!”. Because of the light conditions, and the fact she stayed sub-surface, I couldn’t see her until the latter stages of the battle. Though, when I did, I could tell she was my biggest Bass of the year. My prayers for her to stay buttoned were answered and I finally got to get cosy with this 6-8 monster.

As I watched her swim off after our meeting, I looked down at my watch and realized that all this wild action had taken place in just a 45 minute span! I took a moment to share that last catch on my Facebook page and went back to the action. Could I keep the size progression going? 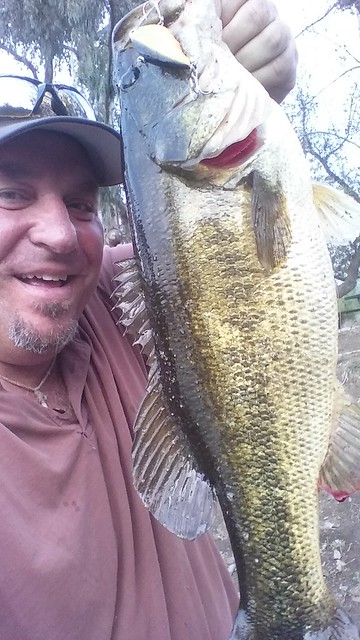 Unfortunately, not. Though, the action didn’t slow down much. I moved over to the opening of the cove and went back to the custom Boogee Bait to nail a couple more in the 3.5 pound class. I also got a pair of nice keepers on the Don Iovino Little Slugger, and another near 4 pounder on the Rattl’n Vibe. I was laughing, because none of them would cull the first five fish.

I moved back to my original spot and quickly hooked into what I thought was another monster fish, perhaps the biggest of the day. However, it turned out to be a tail-hooked 4 pound class fish. Yet, it only took a few more casts before I was hooked into yet another big fish on the rattling bait … and this one would cull! A 5-1 heifer that would give me my biggest 5 fish bag of the year – 26 pounds, 1 ounce!

I moved over to the docks before I left and landed another 4 pounder to get my baker’s dozen. I called it a day … a great day … and headed back home so happy to get an epic session like this under my belt before the fishing turns to the tougher Winter pattern. Though, the Spring bite is only a about 3 months away.