Posted on November 23, 2014 by CavemanCatching

I love football season! Though, I do love the game played in the Fall with an odd-shaped ball, commonly referred to as a pigskin, I am speaking of Bass fishing this time of year when the fish strap on the feedbag and take the shape of a football. Today was a prime example of this phenomenon. 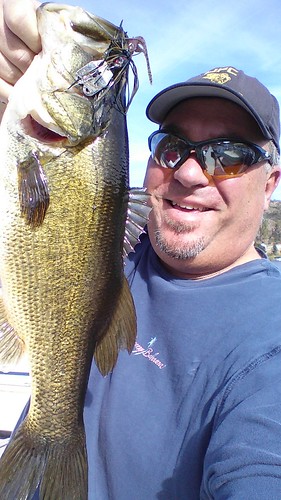 I had a 4 hour window open up in the middle of the day. So, despite the 20 MPH winds, mostly sunny skies, dropping water temperature, and cool Fall temps, I hit Lake Sherwood for my first session in over a week.

After tossing several different reaction baits for no love, I tied on a Cave Custom Booyah Boogee Bait. It took a determined effort, but after a number of casts, in the middle of a retrieve my bait came to a screeching halt. At first I thought I had snagged up … but, suddenly, the snag started pulling back and taking out line. Fish on! After a phenomenal fight, this 4.25 pound pig finally surrendered and the smell of skunk was nowhere to be found.

I got one more bump on the Custom Boogee but couldn’t connect. Meanwhile, I had noticed that the winds had really bunched the Silversides up against the bank I was fishing near. I decided to match the hatch and began split-shitting the Don Iovino Little Slugger in the Jorge Special color. 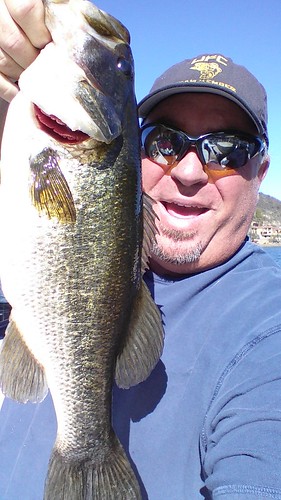 It only took a few casts before I got a nice 2.5 pounder to snap up my offering. Although the hit was barely evident, my Big Bear worm rod is so sensitive I was able to immediately set the hook on fish #2 (no pic).

I nailed two more (a 2 pounder and a 3+ pounder) when I saw the tell tail signs of bait getting chased up. Later, I was dead-sticking the bait when my rod picked up something that might have been another ultra-light pick-up. Since swings are free, I set the hook and impaled another sizable LMB. I was only using 6 pound test Yo-Zuri Hybrid line, so I knew this wasn’t a fish I could horse in. Several drag-testing runs and dives under the dock later, I was fortunate enough to get the net under this 4-11 football-shaped foe.

As I was re-tying after the last battle, a group of four young anglers decided to move in on my spot. I tried a few more casts with the Slugger, but the damage was done. Since I had gotten my limit, I decided to head to another spot and return to the Cave Custom Booyah Boogie Bait in order to get a kicker or two. I had no 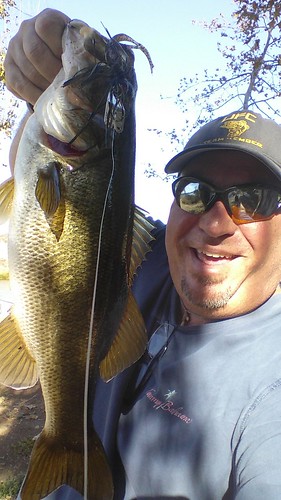 idea what was in store for me.

I hiked it over to a little cove that was protected a bit from the wind. My very first cast was flung parallel to the tullie line. About five cranks of the handle was all it took for my lure to hit a brick wall. My rod doubled over, and the 12# test Hybrid line peeled off of the reel … another big fish! As I fought the fish, big schools of Silversides jumped out of the water, fearing for their lives. All that bait got my hopes up for my new spot. But first, I had to finish the fight at hand. After a great tussle, another 4.5 pound classer decided to pose for this selfie.

After a quick release, I immediately re-casted to the same area. This time, after the bait settled to the bottom, it took only one turn of the reel handle for another chunky monkey to inhale my offering. But, just as I leaned back for a big hook set, my phone began to ring … the Cavewoman was calling. Fortunately, “I was fighting a fish” is one of the few acceptable 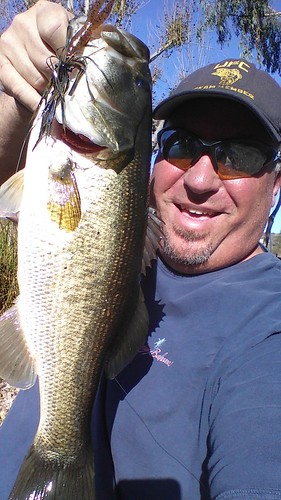 excuses for not answering her call. Without hesitation, I went to work to get another heifer to the bank. Despite a couple of drag-pulling runs toward the tullies, I got the lip n’ pic on this 4 pound class bruiser.

After a quick return call, and a texted picture of proof that my excuse was valid, I returned to working my big Bass bait in the area. Although, I could see the fish chasing the bait up to the surface, I suddenly wasn’t getting hit. However, I kept at it and a couple dozen casts later, not far from shore, my bait again came to a sudden stop and my rod went bendo. And, again, my phone immediately started ringing … yep, the Cavewoman, again! Even though I knew that the same excuse twice in a row was going to be a hard sell, there was no way I was reaching into my pocket for my phone until I was posing for another big Bass selfie. Fortunately, the fish stayed buttoned, the equipment performed flawlessly, and I stayed off the farm for the day. Which led to landing the 4-8 fatty below! 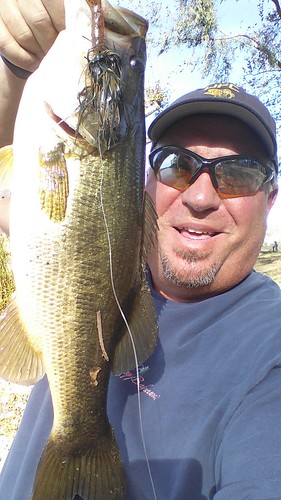 I safely released her and quickly returned the call, only to find out that I had to cut my session a little short … the Cavegirl wasn’t feeling well and couldn’t accompany my wife to her photo shoot. Of course, before I headed home to return to my role as Cavedad, I had to call “Last cast!”. Sure enough, as I popped the bait off the bottom another 3+ pound fish nailed my bait (no pic). I hit the road with 9 fish landed under my belt and a top 5 fish sack totaling 22 pounds … my best of 2014! Best of all, I get to try and do it all again tomorrow since an old (but, young) friend is in town and wants to get his line wet. Can’t wait for kickoff!

To be continued, hopefully … 😉