The night before the Caveboy’s 11th birthday, we decided to head out for a quick 2.5 hour sunset session at Lake Sherwood. It was gorgeous when we arrived: 80°, very light breeze, mostly clear skies – but, enough wispy clouds to make for a fantastic sunset. It seemed perfectly set up for a topwater bite … but, we have seen very similar conditions lately with absolutely no surface action to be found. However, as we walked out onto the dock that was to be our first area of operation, I noticed numerous fish crashing the water’s surface sucking down some of the thousands of fry that had taken up residence there. At that point I only had a four inch 297 senko (Malibu-rigged) tied on. So, I quickly tossed it into the fray. It only sank for about 2 or 3 seconds before the line jumped and started moving to deeper water. I reeled down and set the hook on a nice 2.5 pounder (no pic) that fought well above what his measurements would suggest. 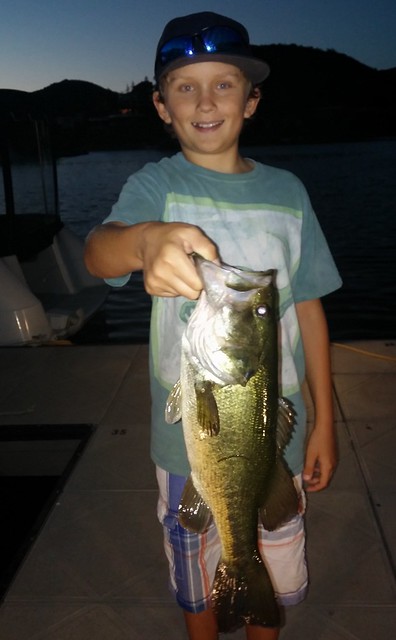 I told the Caveboy to toss his bait into the action. But, unfortunately, as soon as it hit the water the action seemed to die down to a very occasional boil. Even though the topwater bite seemed to have died, I tied on an Ima Skimmer in the Bluegill pattern and started working it through the area where the action had been. It took a few casts before a huge fish totally exploded on the bait doing an inverted 360 in the air while sending the bait a good five feet into the air. When it came back to earth, I let the lure rest on the surface for about 10 seconds before starting to walk the dog again. A few twitches later there was a huge swirl on the pencil bait before the fish came back and sucked it down. BOOM! I handed off the rod to the Caveboy, and he went to battle with this 4+ pound pig that had several more ariels and a couple of line pulling runs in her before she surrendered. 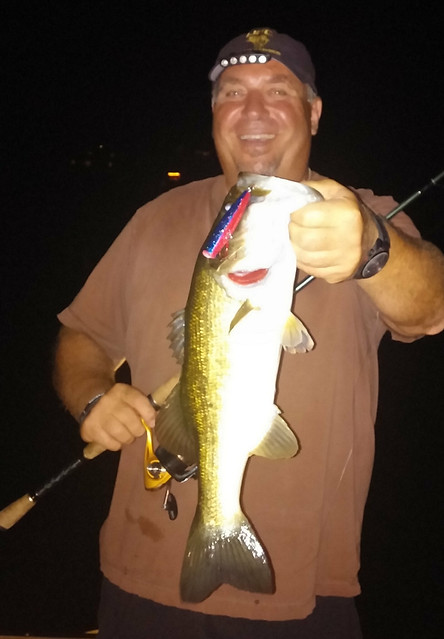 I nailed one more 2 pounder using a Yo-Zuri Rattl’n Vibe, while my young fishing partner had several massive blow-ups on a big black buzzbait. Darkness had really set in, and we could hear numerous fish continuing to feed on the surface. I decided to tie on one of my Caveman Custom “Midnight Rider” poppers. It didn’t take long to find out that it was a wise choice. On the first cast, there was a huge explosion on the bait and, despite a solid hookset, the fish missed both red treble hooks. Though, a few casts later, this nearly 3 pounder pounced on it and found both hooks to be quite sticky.

I nailed four more of these cookie-cutters, handing several of them off to the impending birthday boy, and had a couple more fish who couldn’t quite connect with the bait in the darkness. We hated to leave them biting. But, with a busy birthday on the horizon we had to call it a night. We can’t wait to get out there and do that again!