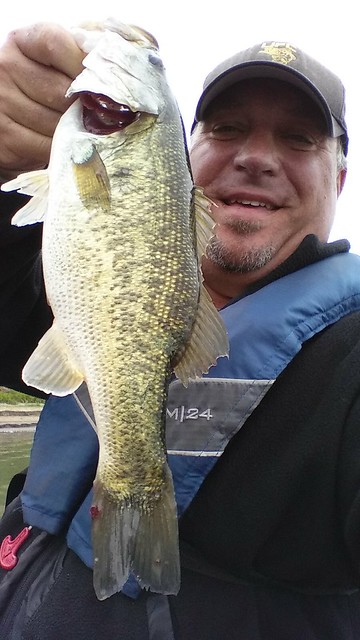 Due to a family emergency, it had been a while since I had gotten my line wet. So, when my fellow UFC fishing fanatic, Rick “R2” Raives, asked if I wanted to get back out on Lake Casitas yesterday on his 20′ Skeeter, I was more willing than a wedding night virgin.

It was a cool 58° under post-full-moon cloudy skies with a slight breeze when we got on the water at 6am, and the shad schools were so thick that you could almost walk across the water. For Casitas, this is a mixed blessing. The shad certainly bring the fish up to feed. But, unless you are dip-netting some of that candy bait and fishing it live, it can be hard to entice a bite. Since we are both committed artificial-baiters, that was not an option.

We threw a variety of topwater and sub-surface shad-like lures to no avail. I decided to try and “match the hatch” with one of my favorite new finesse baits … Don Iovino’s “Little Slugger” in the Jorge Special pattern. It didn’t 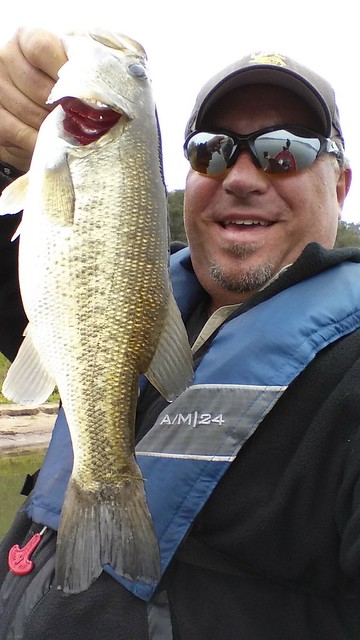 take long before I got the smell of skunk out of the boat with this chunky 2.75 pounder. By the way, if you’re wondering why I’m still wearing the life vest, it’s more for warmth than safety concerns. 😉

As we moved down the bank, we could see the fish chasing up the shad schools all around us. As my bait came off of a rocky secondary point, it got slammed again by this fat 2.75 pound cookie cutter. Not too long afterwards, I casted my bait to the bank where a fish had busted the surface chasing up it’s silvery prey. Thanks to the ultra sensitivity of my Big Bear rod, I was able to feel the stealthy pick up of another clone (no pic).

All my action was starting to get to my fishing friend. So, R2 rigged up the same bait and started getting some action of his own. At first, it was still a bit frustrating for him as he missed a couple of hits as we continued along the weedless banks and points. But, as we came to a point that had a thick patch of grass on it, his fortune changed in a big way. He casted his offering to the outside edge of the grass and 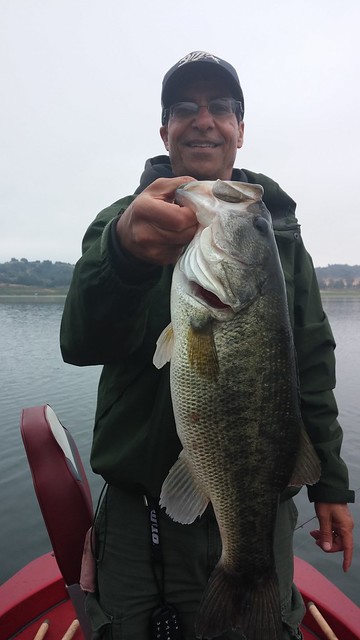 before it had fallen three feet under the surface he was setting the hook on a big fish. At first he thought it was just another model similar to what I had been catching. But, the fight suddenly became heated as the line peeled off his reel. Finally, we got the net under this 4 pound beastly beauty.

We successfully continued with our pattern the rest of the day. Even though we dumped a couple of fish and missed several other opportunities, we ended up with an even dozen fish (six each), with a best five sack around 16 pounds. All of them coming on that “Little Slugger”. As we departed the lake, we were told by gatehouse guard that he was amazed by our fish total, saying that the bite had been tough even for the live bait anglers. We drove away with a true sense of accomplishment … I’m sure we’ll try to remember that the next time Lake Casitas sends us home with a skunk trip!