Posted on May 4, 2014 by CavemanCatching

Although my birthday landed this past Wednesday, I wasn’t able to get out and celebrate with some fish landed until Friday. My good friend, and fellow fishing fanatic, Rick “R2” Raives offered to take me out on Lake Casitas … his home water near Ojai, CA. Even though we arrived at 6:00am to clear skies, no wind, and a comfortable 63°, it didn’t take long for it to heat up to an Africa-hot 93° with absolutely no breeze until early afternoon. 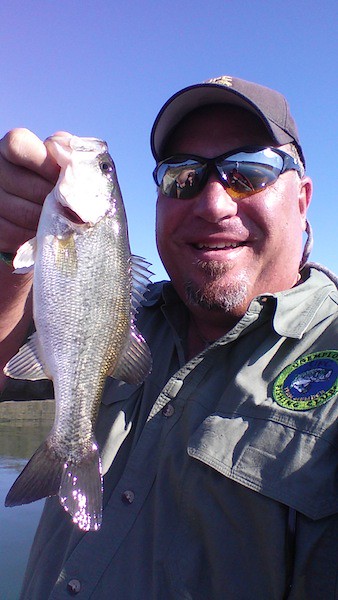 Despite the warm conditions, extremely low water levels, and the algae bloom that had begun, we were very positive about our prospects since reports were that the shad had recently been coming up and spurring the bite on. We started trying various topwater and reaction techniques, but couldn’t manage any interest. We then started throwing various plastics, but still received no love.

Finally, we came to a rocky point and R2 got back to back hits on a drop-shot worm, but was unable to connect. Shortly thereafter, I got my first tap on a T-rigged Gambler Baby Bacon Rind but, unfortunately, there was no follow through.

When the shad began to show on the surface, I could see that they were the young, small models. I decided to try to match the hatch by rigging up one of the new Little Slugger baits from Don Iovino in the Jorge Special pattern. I dragged it across a rocky point, and quickly got this dinky skunk-buster. 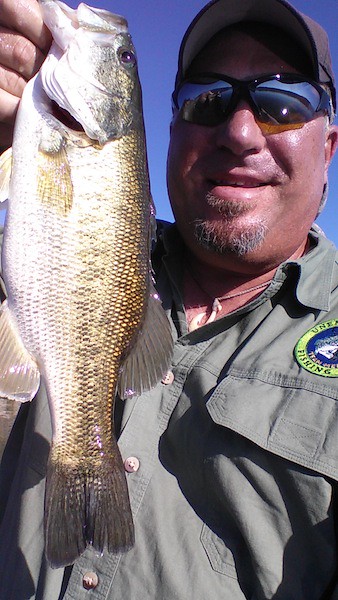 We continued working similar points and kept getting short hits. Though, when we came around one of the main lake points, I got absolutely hammered. Regrettably, I was late on the hook set. I quickly redressed the small plastic bait and recast to the same spot. Once it hit the bottom, I only dragged it about three feet and … BAM! Nice fish on!! Throughout the fight on the 6 pound test Yo-Zuri Hybrid, I was sure that the fish was in the 4-5 pound class, as he made a couple of drag-pulling runs, and kept dogging me under the boat. Though, when he finally showed at the surface, I could see that he was only going to be half of my expectations. Nonetheless, it was great getting my first keeper of the day on the boat.

We kept at our pattern, slowly working similar points, and hoping for a breeze. Both, for cooling things off a bit, and for creating a slow drift, rather than having to occasionally engage the trolling motor to create the two. Though, the breeze wouldn’t come until about 1pm, our next fish came rather quickly when Rick got off the schnied with his own 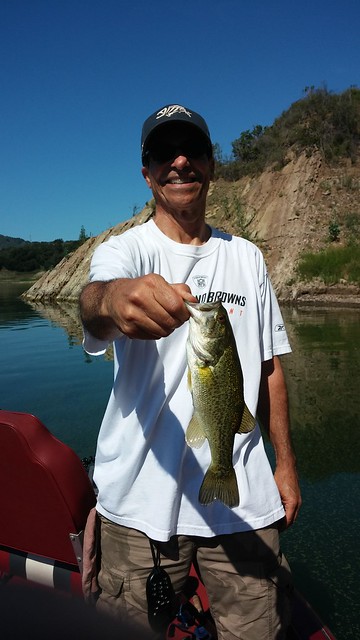 dinky skunk-buster, which inhaled a 4.5″ Flick Shake worm in Watermelon Candy. We argued about whose fish actually held the title of “the smallest”. But, as you can clearly see from the pics, mine was clearly the dinkiest of them all! 😉

We decided to go hit some flats in search of any bedding Bass. But, the algae bloom was making a clear view of the bottom difficult, and any beds we did find had clearly been abandoned. We dug some crankbaits into the bottom along the deeper ledges adjacent to the flats, but found no willing playmates.

So, we returned to the pattern that was working, as we found a nice double-point with some nice chunk rock. We both got a couple of decent hits that didn’t connect. As we drifted past the far side of the second point, Rick said he was going to crank up the trolling motor to top speed and move down to the next point. But, just as he put his foot down onto the foot pedal, I got a strong tap and gave my rod a lightning-quick, sweeping hook 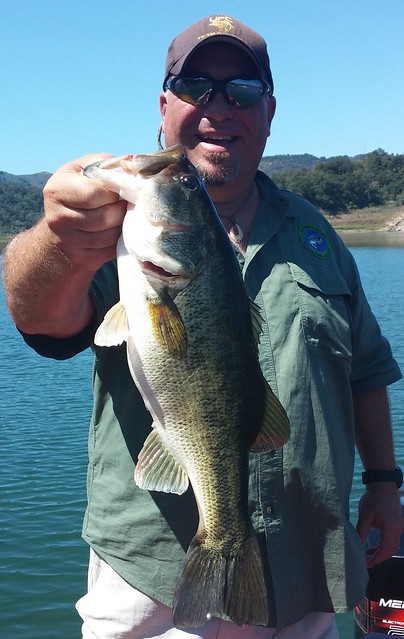 set. My Big Bear spinning rod immediately went bendo, and I felt that this might be a good fish … despite being gun-shy of making that prediction after what had happened earlier. However, my suspicions were hastily proven correct when this 4-pound classer did an inverted 360° flip in the air, trying to shake the hook free. Fortunately, she stayed buttoned up, despite several line pulling runs and two more jumps, until R2 could put the net under her, and got this nice “couples pose” on camera.

After moseying down past the next two points, we came to a rock face wall that usually produces a fish or two for us. However, Friday was one of those days that prevents us from saying that it “always” produces a fish. As we came to the last rocky point in the stretch we were working, we started discussing 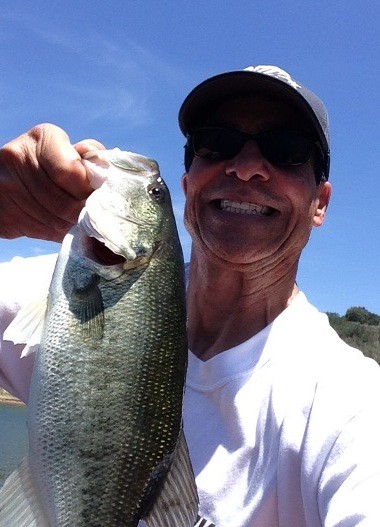 our next plan of action. It wasn’t long into it that we were interrupted by R2’s second fish, which absolutely hammered his Flick Shake worm. Once he landed the 3 pound classer, I offered to take a picture of my fishing partner and his catch. But, he opted for taking a “selfishy”. While he succeeded in getting the fish into the boat, you can see that he didn’t succeed in getting it all into the frame. 😉

We returned to our discussion, once the fish-landing festivities were over, and his catch was literally swimming with the fishes. We decided to head back to a point we had fished early on that had fish on the graph, but all had been infected with lockjaw. Upon our second arrival, we both missed a variety of hits on several different baits. But, again as I dragged that Little Slugger across the point I felt a very soft pick-up and immediately 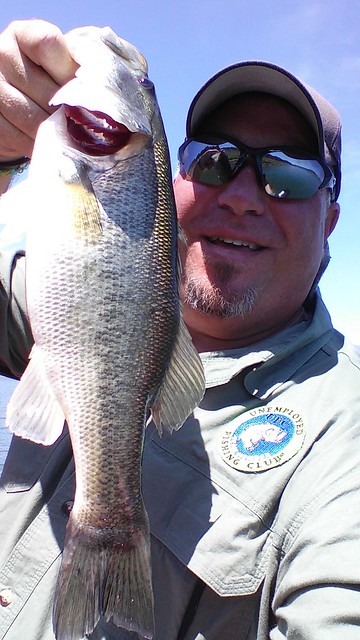 gave it another sweeping hook set. BOOM! Another decent fish that gave an amazing account of itself. Once we had it aboard, due to the magnitude of the fight, both of us were again surprised that it wasn’t bigger than it’s nearly 3 pound weight.

We fished for another 45 minutes, but couldn’t manage any other interest. So, we called it a day. While we were initially a little disappointed that we couldn’t manage a better fish total, on our way out, we learned from the Park Ranger that the bite had died down considerably since the weather turned warm earlier in the week, and that our 6 fish total had been the best of the day to that point. Either way, it was still amazing to be out on the water with R2, and a great way to celebrate with some belated birthday bass!