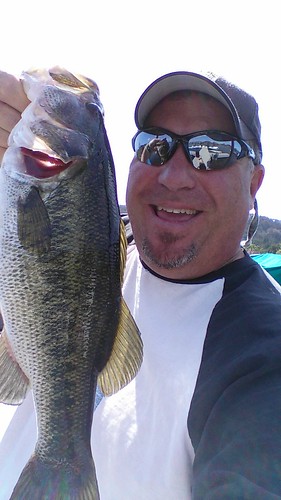 Call it what you will. Lucky. The stars were aligned. Karma rebate. Friday was a ridiculous day of fishing, on many levels. It was totally off … and on … the hook! Allow me to explain.

I met up with my fellow UFC member and long time fishing buddy, Mark “Chief” Torrez, for our first day of line wetting together in several months. A long time for a couple of fishing freaks like us. By the time he arrived at Lake Sherwood, I had already used a T-rigged Gambler Baby Bacon Rind to pull three bucks off of spawning beds – the first of the season. It was a perfect day: partly cloudy, enough breeze to put a little ripple on the water, 78° air temps, and warming water temps.

Chief started throwing one of his usual huge swim baits to try and entice a big pre-spawn fish, while I just had to throw one of the new Yo-Zuri 3DB crankbaits I have been field testing (I knew the bed fish weren’t going anywhere). It didn’t take long before I hooked into this nice chunker, who battled like a fish twice his size. 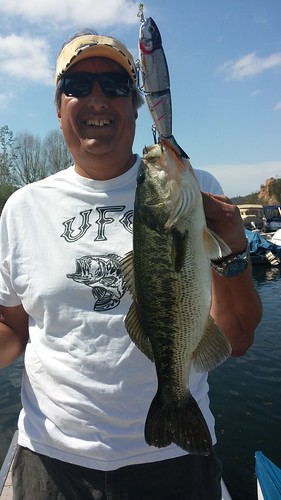 Meanwhile, the other Mark wasn’t getting any love on his swimmie. But, he decided to have some fun and tried to rile up one of the bigger bed guards with it. At first, he didn’t want to have anything to do with it. Then, the fish started flaring up and tried to chase it off of the bed. After several minutes of cat-and-mouse, this 3+ fish decided he had had enough and tried to take a bite of the nest invader, only to be greeted by a grill full of treble hooks!

After vainly trying to get some more reaction bait action, we both decided to work the beds and surrounding areas. The fish were definitely game for that. I pulled a couple out skipping a Senko under the pontoon boats, while Chief was having success on the beds. Suddenly, I hear him yell, “No way!!!”. Turned out one of the fish he was targeting had pulled the Senko (which he had found on the ground) off and, while he was reeling the bare hook back in, another fish tried to eat it. As I watched him immediately throw the unbaited hook back into the water, I was laughing hysterically … that is, until his pole went completely bendo 3 seconds later! That’s right … a nice 2.5 pounder on a bare hook! I wouldn’t have believed it if I didn’t see it myself. 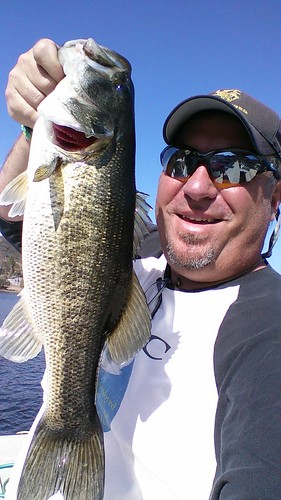 That just foretold what was about to happen the rest of the day, as it began to go wide open. I decided to leave the bed fish alone, since I wasn’t seeing any big females around yet, and concentrate on the fish that were still staging. As it has been recently, the Baby Bacon Rind was the hot ticket as I began nailing several nice fish like this 3 pound classer.

Meanwhile, my fishing partner decided he was only going to catch fish if he found the bait on the ground. Luckily, the area we were fishing had plenty of discarded baits strewn around for him to scavenge, and he put them all to good use wacky rigging the Senkos and drop-shotting the Roboworms. As soon as he lost one bait, he’d go on a scavenger hunt for another. He even had some people that were just lunching by the lake help him find a few. It was hilarious!

Then, we decided to hit the same spot. I pitched my bait under a pontoon boat, while he flipped his to the front exposed part of the boat. 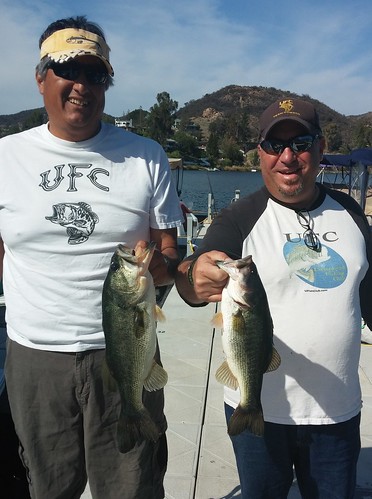 We were immediately rewarded with a double hook-up. As you can see from the pic, he won that battle of the beasts (I should have held mine closer to the camera). 😉

Although we lost exact count, we went on to catch more than 60 fish between us. It was a ridiculous day where the fish just kept biting. I even ended up catching one that Chief had broken off earlier, allowing me to return both his hook and weight to him. Add in the fact that we had doubles, a bare-hook fish, and incredible numbers, and you can see why it was just an amazing day that neither of us will forget any time soon.