It had been a while since fellow UFC fishing fanatic Jeremy “JR” Rodda and I had gotten our lines wet together. So, when he said he wanted to hit up Lake Sherwood for the late afternoon/evening bite yesterday, I was more agreeable than a Schnauzer at the Snausages factory. We arrived around 4:45pm and found clear skies, a slight breeze, air temps in the mid 80’s, and water temps in the low 80’s. 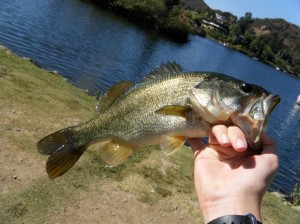 Before I could even get my line in the water, JR yells, “Got one, Cave!” and scored this day starter on his very first cast, using a spinnerbait. He was afraid that he would now be subject to the “First Cast Curse”. Luckily, that wasn’t the case!

It just seemed like conditions were right for some surface action. So, I started out with an Ima Skimmer, which has become one of my favorite topwater baits over the last couple of years. I love the popping action it has because of the back-weighting, and it is very easy to “walk the dog” with it – even at very slow retrieve speeds. Sure enough, on my second cast with it, this 3 pound class fish exploded on the lure and dragged me through the weeds. Fortunately, the 10 pound Yo-Zuri Hybrid line held up perfectly and both fish and lure made it safely to the bank.

I got another blow-up on the Ima before I moved down the bank between some one-boat docks that were in the shade. I flipped the bait beside one of the boats and started twitching it back. Near the end of the retrieve I saw a nice fish tracking the lure in. I stopped the bait only 4 or 5 feet from the bank and watched the fish slowly move in on it. Just as he got nose up, I gave the Ima a little twitch and that was all it took … KaBOOOOOOM!

This 4+ pounder absolutely annihilated the pencil popper and gave me a short but tough battle before agreeing to this photo op.

I nailed one more 2+ pounder and got two other blow-ups on the Ima Skimmer before I ran out of shaded real estate – which seemed to be the ticket for the topwater action. So, I switched over to my old stand-by: a 5″ Kinami Flash in Mad Melon … Malibu-rigged, of course. I started to put a hurtin’ on the fish with that bait, nailing 4 fish that were all in excess of 3 pounds, and all willing to put up a serious struggle. Meanwhile, JR , who was down the bank a ways and working the larger docks, started throwing a drop-shot Roboworm and a wacky-rigged red Senko. 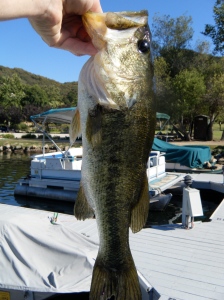 It seemed that every time I glanced his way he had a fish on! He was able to haul in three fish on each, including this long but skinny 3 pound beast (So much for the curse!).

The sun was about to set when we made a move to the front side of the lake which has some nice flats and several large docks. I went for the former while JR headed to the latter. Once again, I picked up the Ima Skimmer and casted parallel to shore. On my first cast I got a nice blow up. On three of my next five casts I nailed fish (all in the 3 pound class) and had another blow up. I fished that bait until dark, managing two more blow ups, but no hook ups. Meanwhile, JR added another nice fish on a Zara Spook.

I then switched to a 7″ Malibu-rigged Senko in black with blue flake and flipped it into a secret spot that I know always holds big fish after dark. Sure enough, on my first attempt: tick … tick … BOOM!

This husky 4 pounder gave me a nice test forcing me to retie afterwards from rubbing the line on the rocks. After re-rigging, I tossed it back to the same spot two more times and nailed two more cookie-cutters.

Now that it was completely dark, I had to go back to a topwater bait … my newly designed Midnight Rider popper. I tied it on and again tossed it parallel to the shoreline. After just three or four pops there was a huge explosion on it that completely missed. Feeling confident with it, I tossed the Rider several more times before turning around and casting it the other way. I worked it to within ten feet of me when suddenly the bait got completely sucked down with a big slurp. BAM! Big fish on!!

It was a short but heated exchange before I got this 4+ pound pig ashore. As you can see, she completely choked the bait down.

I was ready to put my new creation through more paces, but time had run out and we had to head home. The final totals were 8 fish for Jeremy (1 spinnerbait, 3 Roboworm, 3 Senko, 1 Spook) and 14 for the Cavester (7 Senko/Kinami, 6 Ima Skimmer, 1 Cave Custom Midnight Rider). Can’t wait to do that again!